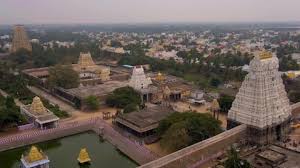 As the name suggests, the Kamakshi Amman Temple, one of the 51 Shakthi Peethas, is dedicated to Goddess Kamakshi, and where thennqvel part of the Mother is believed to have fallen.

Goddess Kamakshi is also worshipped as the supreme power and here is depicted as Maha Tripurasundari.

The legend goes that, for protecting them from the rampage of Bandasura, all the Devathas sought the help of Lord Shiva. To overcome the demon, Lord Shiva asked the Devathas to offer their prayers to Bala Tripurasundari Devi. The Devathas masked as parrots came to Kanchipuram and offered their prayers to Bala Tripurasundari Devi. The Goddess heeded their call and killed Bandasura and brought him from Kailasam to Kanchipuram. Bandasura was buried there as per the Goddess’ wish and the Gayathri Mandapam was built. The Goddess said that she would bless all the devotees with her vision, hence the name Kamakshi.

Regular human and animal sacrifices were offered to Goddess Shakthi, known as the angry Goddess. To pacify the Goddess Adi Shankaracharya composed Soundarya Lahiri and then right in front of the main deity of Goddess Kamakshi he established the Shri Chakra (also known as Kamakotti Peeta). It is believed that Adi Shankaracharya attained enlightenment after the establishment of the Shri Chakra. 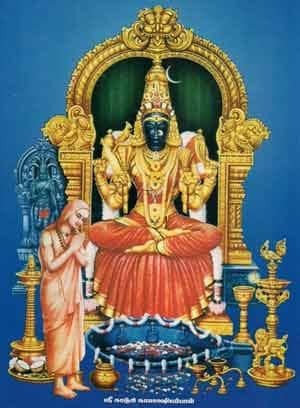 The Kamakshi Amman Temple is spread over five acres of land and has four entrance points. From outside, the spire of the temple covered in gold is visible. At the main entrance of the temple you will find Mahishasura Mardini on the right side, Kalabhairava on the left side, and a massive Dwajasthambham at the very centre. The idol of Lord Vinayaka comes before the darshan of Kamakshi. On the outer prakaram of the temple the main deity of Goddess Kamakshi is surrounded by the deities of Saraswathi, Annapoorna, Ayyapa, and Adi Shankaracharya. The hundred pillared hall of the temple or the dwajaarohana mandapam is situated on the outer prakaram of the temple. The shrines of Soundaryalakshmi and Ardhanareeswar are also situated within the Kamakshi Amman Temple. Panch Ganga is the main tank of the temple. 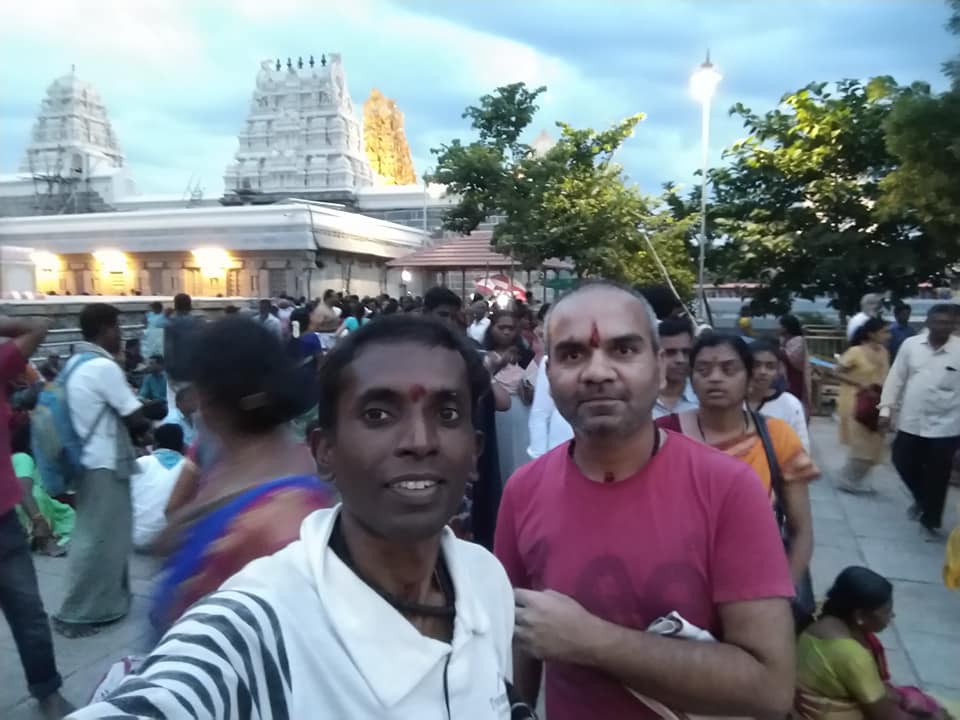 Kanchipuram is also popularly known as the City of Thousand Temples as many temples have been excavated from the area. The Temple was built in the 7th century .

When we reached there at noon we were told the 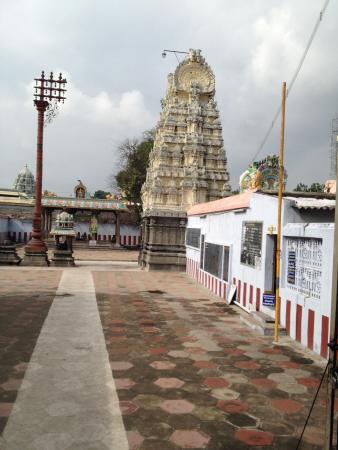 temple would open only after 6 pm. We parked the car and were sitting what to do next when a man on his moped came and halted looking through the window at us for a long time as though wanting to say something. The moment I rolled down the glass to know, and before I could ask anything he immediately began saying in Tamil that the temple will open late so we go to the ADI KAMAKSHI temple just

walking distance away. He said that it is a powerful place to meditate and there the Mother is actively present too. I folded my hands and thanked him in gratitude and he immediately left. We then walk to the Adi Kamakshi temple and meditate there. Later I was astonished to know that this is the place where Mother had appeared in a very Ugra form, so Ugra that Adi Shankaracharya ji installed the Sri Chakra here to pacify the Mother, after which she came to be known as Mother Kamakshi. 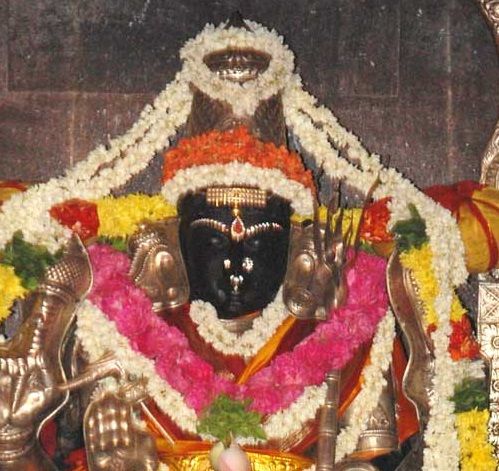 Goddess Kamakshi, according to scriptures, is basically a re-embodiment of Goddess Parvati, who meditated on Lord Shiva to purify herself to be in match with the Supreme. It is believed that she meditated after building a Shivalingam out of sand and Lord Shiva appeared before her. The Shivalinga is the Prithvi Linga and hence this is the temple of the earth element out of the 5 major Panchabhoota temples. 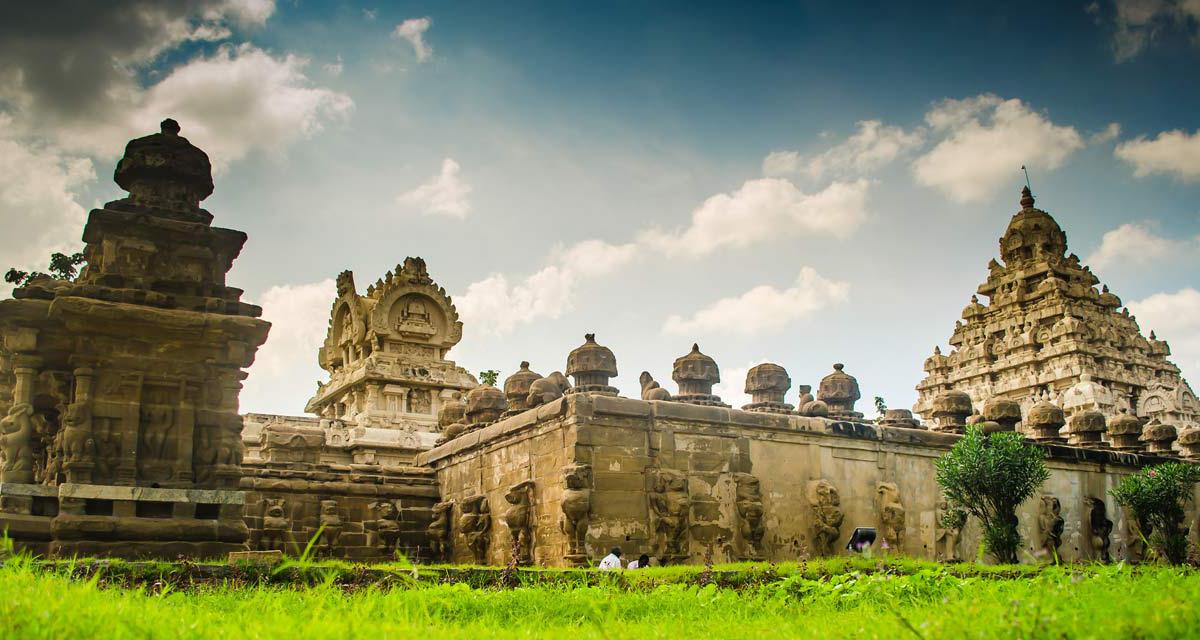 So this way, we visited the Ekambareshwar temple (walkable distance) which contains the Prithvi Linga (read our visit there) and then spent quality and long time in the Adi Kamakshi temple and by the time we were out to the main Kamakshi temple it opened by 6:30 pm. But this main temple was overcrowded and we just had darshan and left, only to realise that the main temple of mysteries and the Sri Chakra was the old Adi Kamakshi temple nearby where there was no crowd at all. It is astonishing to see that this temple lies untouched by visitors despite being the main place of all the legends, and hence best place to meditate or do Sadhna. Even he Sri Chakra is at very visible distance. Only the divine Mother knows her leelas. All this was revealed only because that strange man out of nowhere came and gave this information and went off, without which we would have never known, and also we would have left the place in the noon itself without being able to visit any of these temples. Heartfelt gratitude to my Gurudev who remained with us throughout this journey and love and gratitude to the Divine Mother, in whose arms we sustain. 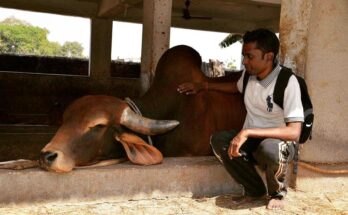 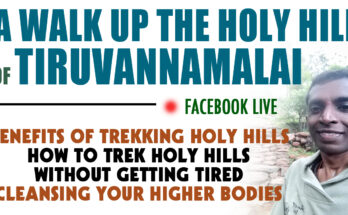 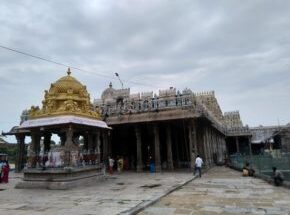